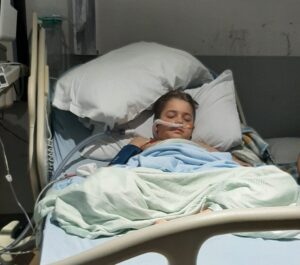 On Sunday 7th March, I awoke to every parents worst nightmare, my son was unresponsive and not breathing. If it had not been for my knowledge of basic life saving skills and quick thinking, he would not be alive today.

When I think about that it gives me chills and makes me think of other people and families. Would you know what to do in that situation?

My passion to help others as never been in question and now more than ever, this has really hit home and made me more determined to raise awareness on the importance of taking a life saving course.

I believe that at the very least 1 person from every household should have basic life saving knowledge and skills.

As a company we will be delivering free fully accredited basic first aid courses in our local area with a view to branching these out nationwide. I’m also trying to raise funds via a go fund me page to purchase an AED Defibrillator for our local community. Below is my story from the scariest time of my life.

My Son Was Not Breathing

My son had come down stairs on Saturday night feeling a little under the weather, but nothing gave me concern or alerted me for what was to unfold the following morning.

We went to sleep on the couch that night watching films and chatting about them, something woke me up to a living nightmare in the morning, I don’t know what but whatever it was I’m so grateful it did. My son was not breathing.

As I stared at his motionless body on the floor it took me a few seconds to process what was happening, I jumped off the couch and realized he was not breathing, no colour in his face, lips blue and his pupils fully dilated just staring up at the ceiling.

I began CPR immediately shouting up to his mum who was sleeping in bed upstairs, within 2 minutes I saw the colour come back in his face and his pupils go back to normal. It was a massive relief, but this was only short lived as Joshua then began to have a seizure. He was still unresponsive.

I made the decision to then run upstairs and wake Sam (his mum) up, the horror on her face typified the situation we found ourselves in.

We both ran back downstairs to Joshua, with Sam falling halfway down the stairs in panic and damaging her thumb. I continued CPR whilst Sam rang the ambulance, they stayed on the phone until the 1st paramedic arrived at our house within 6 minutes of that phone call.

Once the 1st responder arrived, he took over the situation and told me I could stop chest compressions, which I was reluctant to do but trusted his ability. Joshua was still having seizures and was still unresponsive.

4 more paramedics arrived and 4 police officers, they quickly gave Joshua a drip in his arm and had the AED pads on him just in case he went back into cardiac arrest.

I can remember just going outside and slumping on the floor, worrying that they was going to tell me that he wasn’t going to make it. They then transported him to the ambulance quickly and Sam accompanied him to the hospital.

I stayed at home with our 6 year old son, who had seen and heard everything. It must of affected him as once the paramedics took Joshua to the hospital he just crawled back into bed and slept for a further 4 hours.

I had to sit in my hallway waiting for news as the police wouldn’t allow me into the living room as per their protocol. It was the longest wait of my life, just sat their waiting to hear of my sons condition. After about 1 hour the police received news that they were no longer needed at our house and they left.

I must of rang Sam about a hundred times checking on his condition, the waiting around was torture. I went back into the living room and cleaned up all the paramedics pads and rubbish, as well as mopped up the blood on the floor.

I think I was just trying to occupy my mind and keep busy as the waiting to hear news was so hard.

After the longest 3 hours of my life Sam phoned to tell me that they had placed Joshua into an induced coma as he kept having seizures, and they was taking him down for a CT scan.

Everything was just a waiting game and was absolute torture, but we just had to trust the amazing NHS workers that were caring for Joshua at the Royal Bolton Hospital. 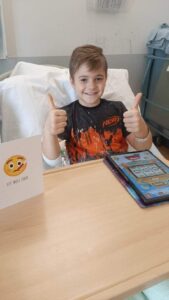 hua spent the full day in an induced coma and the following day they started to slowly wake him up, we was praying that the seizures had stopped.

Thankfully that was the case and he spent the next 6 days with his mum never leaving his side once in the hospital, were his recovery has been quite amazing, getting progressively better each day, albeit on a lot of medication and lots of tests to try and find the cause.

Unfortunately we still don’t know what caused this, which is frustrating for us but the main thing is that he is getting better and is now at home recovering.

So through the scariest time of our lives it became apparent that we needed to raise awareness for people and families to take part in a basic life saving course at the very least. The amount of people I have spoken to have said they would not know what to do in this situation and that is a scary prospect to me.

We are going to initially start to deliver free fully accredited life saving courses through our company Kickstarterz Sports in our local area, with a view to delivering them further, and the response has been nothing short of remarkable.

There are other plans in place to further raise awareness such as to purchase an AED defibrillator for our local area and raise funds for resources and equipment to help deliver further courses.

We have set up a go fund me page to try and raise these funds with all proceeds going towards our mission to raise awareness and help others.

If you would like to donate please see the link at the bottom of the page or by clicking here, were even the smallest amount will go such a long way in achieving this goal.

Thankyou to the Daily Mirror and the Daily Star for publishing our story.

I know that without the life saving skills learned through first aid courses over the years that my son would not be here today, as fast acting response is needed when someone is not breathing. It’s the ability to try and keep calm under pressure and act accordingly.

Unfortunately so many people would not know what to do and panic and as hard as it is for me to say this would cause people to die. Our aim as a family now after going through such a traumatic experience is to help others by providing the awareness needed.

I have been called a hero and amazing, but personally I feel that I am just a dad doing my job, which is to protect my children and family.

The thought of this experience will never leave me or Sam but we just hope that it can help inspire others and raise the awareness needed.

Our son is a healthy and active 10 year old boy and this has totally come out of nowhere so we now know that these kinds of things can and do happen, although very unlikely unfortunately it does.

The chances of needing to use these skills is very slim but they COULD just save a LIFE.