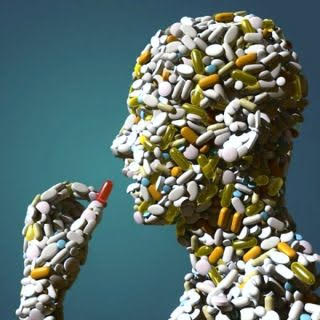 Self medicating seemed to be the best idea for me. With all the uncertainty of what was happening to me, and me believing I had a physical illness, (COPD), I decided to try and self treat my problems. I was to scared and worried to go to the doctors or to confide in anyone else.

As a youngster, I used to suffer with severe asthma. So I was already accustomed to using inhalers. My partners Nan suffers with asthma to and she would have lots of different inhalers. She would give me some of hers to use and I started to take brown (Beclometasone) and blue (salbutamol) inhalers. After a few months it was clear these were having no effect.

Panic set in a little at this point, what now, as it was all I knew about treating a breathing problem. I began to buy lots of different over the counter medicines such as olbas oil, nasal sprays, vicks and pretty much anything I could think of that would help with my breathing.

Some of the things I would do with these medicines, looking back now was quite bizarre. It goes to show that when you are so scared and worried, you will literally do things you wouldn’t do if you was thinking logically. I would put vicks all over me, my pillow and once when I was really panicking, I put some literally up my nose. Safe to say I didn’t do this again.

I would use the nasal spray constantly as I thought my nose was blocked and would try and clear it. Always in my pocket to was a vicks nasal tube, I was inhaling this on a very regular occurrence through my nose.

I bought a face steamer and would put drops of olbas oil in it and put my face over for 20 minutes a time, I was also putting the olbas oil in my bath in the hope it would help my breathing.

When everything I was trying wasn’t working, the more desperate I got and would google other ways to help. If anything my condition was getting worse and i know now this was due to the severe anxiety i was bringing onto myself. When nothing is working, it’s quite normal to panic.

I read online that ginger was good for breathing problems, as it works as an anti inflammatory. As soon as I read this, I went and put a full spice bottle in my bath to try and use it through steam. Didn’t work. The next technique I tried was breathing exercises such as yoga ( Happy D.I.Y home has some great videos on this) and meditation. I struggled with these as I couldn’t concentrate long enough to do it. My mind would always start racing about all the negative thoughts I was experiencing.

So after all the self medicating that I had tried but to no avail, I decided to make a radical change to my lifestyle. This was after several years of trying different medicines and techniques. The next thing I would try was to lose weight and change my diet. This was quite possibly one of the best things I did. I will talk more about this in my next post.

It really is scary when you are so hung up on an idea your mind has manifested. The single handed best thing you can do if you are feeling bad, no matter what you may think it is, is to talk to someone. I definitely do not recommend to self medicate and you should always follow the doctors advice.