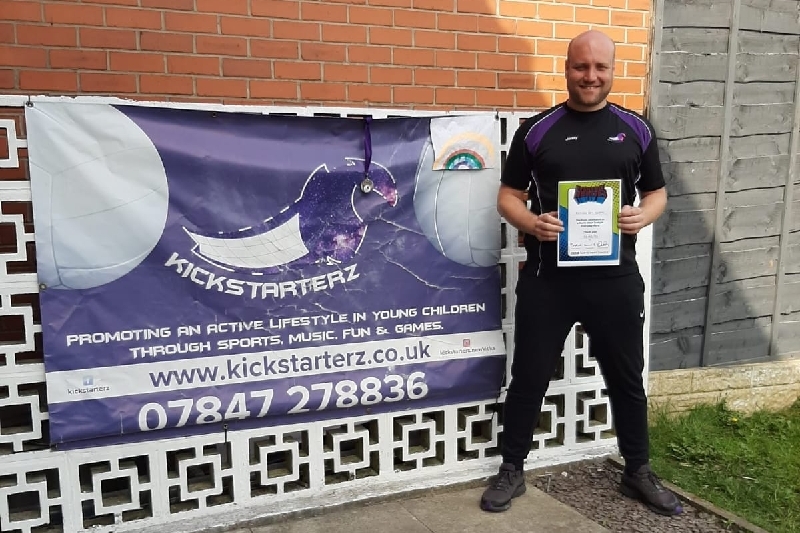 Kickstarterz fitness videos: I briefly touched on the live videos in my last post, and in this post I wanted to elaborate a little more on them. After that first live video on the Kickstarterz Sports Facebook page, I was so full of energy and couldn’t wait to do another. I started to plan more than just the original few I was going to do.

Coming up with ideas

I decided to do a mixed batch of different activities, challenges, using household items to create active sessions and basically just a lot of fun and games. I created an easter egg hunt to run alongside my sessions, were I put different items each day in my videos, in the background, and then during Easter week gave everyone clues to the items.

They then had to look back on the videos and find the items. I loved doing this, I had so much fun setting that activity up.

Music plays a massive part of my life and I love using music in my classes, so I added dancing and moving to music into some of my live videos. I did a Kickstarterz danceathon, were it was 30 minutes of non stop action songs such as cha cha slide and time warp to name a few.

The feed back I got from doing these ones was fantastic and just intensified my need to carry on doing the sessions.

Another session that became a favourite of mine was the scavenger hunts, i would come up with several items that families would have to find. At the end I would ask if they could send a photo to Kickstarterz of the items they gathered.

Just use what you’ve got

I started to introduce household items into my sessions such as socks, toilet roll tubes, bed sheets and lots of other items. It was essential that all families be able to take part in fun activities with items that everyone had access to. I showed so many activities such as target aiming, balancing activities, hand eye coordination, and obstacle coursesobstacle courses to name a few.

I couldn’t believe how fast the time went but I was really happy doing these sessions as not only did I feel good that others were enjoying them and taking part but it was also helping me.

In some of the sessions my two sons took part and they really loved being on the videos. Their favourite was definitely the scavenger hunts.

As well as the live sessions, I also set challenges which I posted on the Kickstarterz sports Facebook page frequently. Some of the challenges were cheerios stack, this was a fun little activity were you had to stack as many cheerios on a piece of spaghetti in 30 seconds.

As a child I loved the story of Winnie the pooh. Stories of friendship and working together, also as I got older I realized they had a little bit more meanings to them including a lot of emphasis on mental health.

I decided to introduce these stories in my live sessions and did a few story telling videos. I included actions in the stories to such as running and bouncing and throwing a ball. This went hand in hand with the story.

Lockdown lifts and some normality resumes

After 11 weeks or so, I decided to stop doing the live videos as the government announced that schools were to reopen and lots of people were returning to work.

I really miss doing the videos but I feel so happy knowing that lots of people got some benefit from them, and they are also available on Kickstarterz YouTube channel if anyone wants to view them anytime.

All being said and done I loved doing these sessions and I am currently working on some ideas to make it part of Kickstarterz sports service. In my next post on my memoirs of lockdown, I will be talking about things we did as a family during lockdown to beat the boredom including momentous occasions such as VE day and the clap for keyworkers.

One thought on “Kickstarterz Fitness Videos”